Can drones help your business meet its environmental commitments?

Freddie Mercury once sang: “I want it all - and I want it now”. Green activists may not be singing from the exact same songsheet, but they are not far off. Under constant pressure from campaigners, governments are ratcheting up the pressure on the business world. Commitments become more onerous; deadlines shorten. Many businesses will need to adapt radically to avoid the thumbscrews and drones will often be a crucial part of their response.

The International Energy Agency predicts that global energy usage will surge as the world bounces back from the covid pandemic.  In the immediate term, governments will need to prioritise the generation of tax receipts to fill depleted coffers, but at the same time the UK government is planning to host the COP26 summit in November 2021 and the Biden administration is rejoining the Paris Climate Change Accord. The upshot is that international pressure will cascade down to individual countries, whose governments will inevitably respond by tightening the legal ratchet on people and companies. 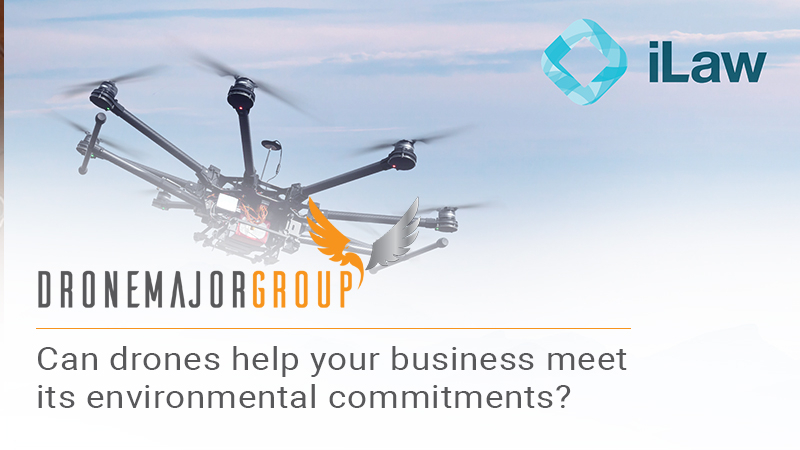 The British government is setting out to lead the world when it comes to combatting climate change. The Johnson Cabinet is committed to a 78% reduction in carbon emissions by 2035, compared to 1990 levels, and to achieving a net-zero status by 2050.  Achieving these targets will inevitably compel huge changes across the economy and few, if any, businesses will be left untouched.

The commercial uses of drones are expanding rapidly and the environmental agenda will spur exponential growth. Drones are low-cost, lightweight and powered by battery rather than fossil fuel.  They also often allow a more efficient use of human capital by minimising labour and travel which people would otherwise need to undertake, which also produces its own environmental advantages.

Many businesses will be able to reduce their carbon footprints by using drones to effect the delivery of products. Currently much drone use is confined to last-mile deliveries but as drones carry greater weight over larger distances, meaningful reductions in road traffic will be possible.

Business sectors which will benefit from drones

Sectors such as distribution, transportation and logistics will be obvious beneficiaries of drones, but many others will increasingly rely (whether directly or indirectly) on unmanned aerial vehicles as the technology improves.

In agriculture, drones can spray crops (reducing the use of fertilisers), plant trees and be used for aerial surveillance purposes, such as monitoring livestock, observing water levels and spotting diseases in flora and fauna.  This will be a boon to sustainable food production by minimising wastage and identifying problems at the earliest opportunity.

Aerial photography will also help to police fishing grounds and wildlife conservation areas, and will facilitate the mapping of remote areas. Authorities such as the police and coastguard can use them in search-and-rescue missions and to take swift action following natural disasters such as floods and landslips.  Drones can fulfil a variety of functions across the security and defence sector, as well as crowd control and safety monitoring at large-scale events and festivals.

UAVs can carry meteorological equipment such as thermometers and pressure and humidity sensors, collecting climate data and enabling remedial action to be taken.

As anti-carbon measures become ever-tighter, cleaner technologies such as solar panels, wind turbines and high-voltage power lines will expand. Installations such as turbines need regular maintenance and drones can be used to identify problems, enabling human labour to be used more efficiently.  Drones will be of great assistance to the energy sector and thus indirectly to all businesses, even those which might think that UAVs are irrelevant to their particular operations.

The Queen’s Speech of 2021 included specific reference to government support for new green industries. These industries will flourish whilst major infrastructure projects such as the UK roadbuilding programme and the potential third Heathrow runway will need to contend with legal action, as well as social media and other campaigns by climate change activists.

Governments have many arrows in their quiver when it comes to businesses – compelling them by law to take particular steps, for example, to avoid contamination of land or watercourses, requiring listed companies to make disclosures to the market of their policies on environmental sustainability or using the taxation system to incentivise or disincentivise certain sectors or activities.

As countries commit themselves to ever-more stringent environmental targets, they are likely to impose more direct and granular obligations on companies and their directors. At the same time, pension funds, investor sentiment generally, media pressure, public opinion and campaigning organisations will reinforce the trend towards businesses taking - and being seen to be taking - wider and deeper measures to protect the environment.

Legal proceedings are likely to be taken more frequently against individual companies and their directors if their commercial activities harm human health or the environment by polluting the air or contaminating water. Litigation may be taken if people’s quality of life is diminished by noise pollution or other unwanted effects of industrial and manufacturing processes.

It will be crucial for both legal and commercial reasons for all businesses to keep their operations under review and to respond promptly and positively to the evolving legal and regulatory framework. Directors and shareholders cannot afford to treat these issues as optional extras or of niche concern only; their employees, customers and wider society are going to hold them to higher and higher standards and the increasing roll-out of drones will be part of the solution for many enterprises.